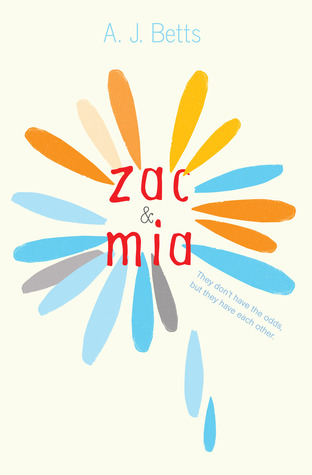 I won’t lie. I totally read this because I needed to finish my AtoZ challenge and this was the “Z” I had the quickest access to. I have heard a lot of mixed reviews on this.

I really liked Zac. He was definitely a character that I really loved from the beginning. He’s the type of boy that you just really connect to and really love from the get go.

Mia on the other hand, I didn’t really care for, at first. Her story arc was really good though. Once I got to know more of her, I felt for her. She’s still not my favorite but I understood why she acted the way she did.

I think this book is supposed to be a friendship story. These to youngsters are dealing with cancer and base a friendship off that. They help each other get out of the dark parts but then it becomes a romance? I’m not sure, it’s quite unclear. This was one of my issues with the book. I loved the friendship and I would have enjoyed this more, if it would have stayed that way. Just because it’s boy and a girl, doesn’t mean she had to push them together.  Although, it’s not quite clear.

I did love the family supporting characters. Especially, on Zac’s side. I love how she showcased both mothers and how they were so different.  Both kids had issues with their mothers, one was there too much and the other not there enough. Just goes to show, you just can’t win with kids. Haha. Just kidding! 🙂

I felt like there was no plot to this book! It was like a long introduction of these characters and how they felt about their diagnosis. There was a lot about how they became friends but there was a lot lacking plot wise.

I got through the book rather quickly. It never really felt boring but just like I was left unsatisfied. The ending was kind of left open and that’s not really my thing. There were a lot of things she just didn’t really wrap up and it just left me wishing for more.